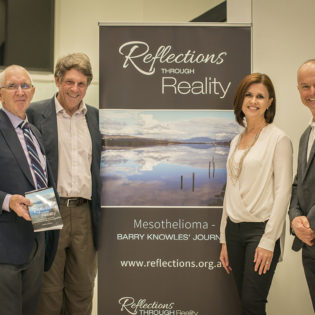 Immigrating to Western Australia with his family in 1952 as a ten-pound Pom, Barry Knowles was fourteen when he took up an apprenticeship as a carpenter and joiner.

His skills and his honest, hardworking approach made Barry a respected and valued member of the WA building industry until his retirement in 2007 – but Barry paid the ultimate price. Diagnosed with mesothelioma in 2010 and given six months to live, Barry Knowles has defied the odds and now, with the support of his wife, he shares their darkest hours.

Barry’s despair gives way to hope as he discovers a new purpose and a deeper determination founded on his faith, and buoyed by the love of those around him.