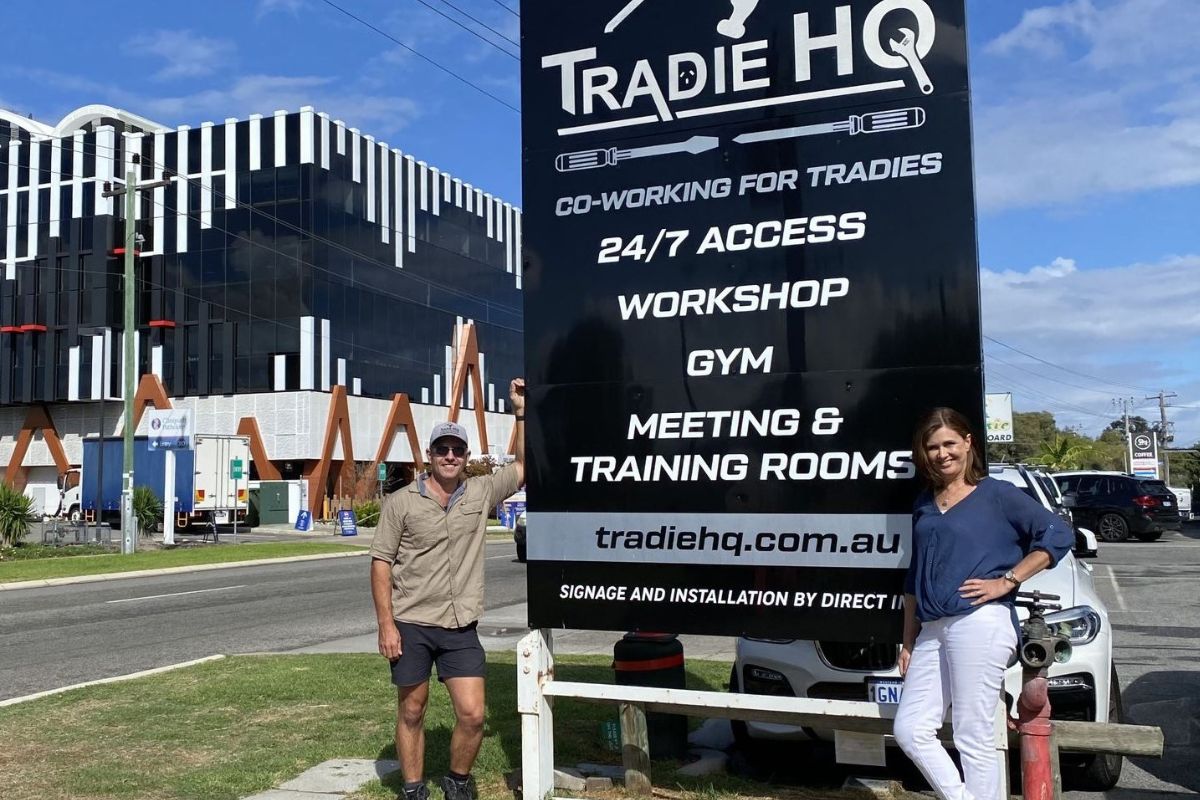 Reflections founder, Jo Morris, caught up with Dan Bailey, Tradie HQ to talk about him coming on board as an Steeltoes & Stilettos ambassador.

Tell us about Tradie HQ, Dan

Tradie HQ is a co-working and incubator space for small trade-based businesses with low risk and flexible options that is not their home. From my own experience, if you’re a trade-based business and you want to take the leap from working out of your home to getting your own commercial premises, there is a massive gap and no real stepping stones in-between. You go straight from home-based, trying to buy your own place or sign up for a 3–5-year lease… it’s a pretty big jump. So after having a bit of a look around, I came to realise that there are plenty of other coworking places out there for tech and white-collar startups but nothing specific for tradies. The main thing for Tradie HQ is it’s accessible, located in Osborne Park which is ultimately the commercial CBD of Perth, and we have other extra features such as a gym, storage space and a workshop so that you can actually conduct your business and get all your stuff out of your garage. You’re also around other businesses that are doing the same as you so you can bounce ideas off each other. We can also accommodate the scale of your business.

The broader networking opportunities and the fact that you are around other trade-based businesses with similar interests and challenges is the most important thing. It’s about the culture and bringing the people together. I’ve witnessed people exchange information and experiences that would save them years of mistakes. It doesn’t matter if you’re a young or older business person, as in time in business not necessarily time on earth, someone who has been in business a relatively short amount of time can pass information up to someone who’s been in business for longer about technology or about what job management program they’re using and, conversely, the person who’s been in business longer has experience with the peaks and troughs and trends of the industry. It’s 100% a two-way street and both ends of that spectrum can get great value from the other.

What did you do before Tradie HQ?

I’m an electrician by trade and have an electrical contracting business. That’s where I got a lot of my experience and what led me to identify the shortfall in what was available out there for trade-based businesses, along with my exposure to people who had been successful and unsuccessful in business. I narrowed a lot of it down to education and getting information from a reliable source that’s relevant and prequalified. When you start a business, you’re typically time and resource-poor which might lead you to Google to find an ’expert’, like an accountant, for example, only to find out down the track that they’re not what you expected and you’re left to face a court battle for the fees they want to charge and then, once you move on, you have to pay the next accountant more to fix what the previous one didn’t do. I was also part of an equipment hire company and then started Tradie HQ.

What did you, do you know about Asbestos… did you learn much about it in your training?

Going a bit further back from being an electrician I was in the Army straight out of school. So, every year we would do training and some of that was around asbestos. I had a bit of a prior education around the dangers of asbestos. And at 41 years of age, I am aware of places like Wittenoom and I’ve seen the horrid photos of the kids playing in the tailings, etc. To see those photos, understand what it was they were playing in and then hear that those people had died later in life from an asbestos-related disease…. it stays with you.

So, I did my mature age apprenticeship as an electrician through CET and there was an education piece around asbestos. It was more around ‘there are some boards out there that contain asbestos. If you need to drill into them, make sure you dab some oil on them or something to capture the fibres.’ The other thing was, talking to my Dad and other senior electricians that I worked with, back in the 70’s I guess, they were involved with installations in a lot of the high rise buildings in the city and I remember one of the pranks… two things actually … one is when they walked onto the floor where the steelwork was up. There were guys in there lagging the steelwork with the asbestos slurry and so they’d walk onto floors and not be able to see from one end to the other from this suspended dust which had a high percentage of asbestos. The other thing was part of the hazing that went on, a new apprentice was taped to a beam and they would spray them with that lagging. Which is horrendous. In this day and age, if you walk into a place that’s heavy with dust, it’s unpleasant but then to realise that that dust was asbestos fibre is pretty bad. And that was relatively recent, like I say, in the 70’s. So we might not have even seen the issues yet for that generation.

Asbestos has left a huge legacy… do you think the message is still relevant to future generations… should we still be espousing the message of asbestos safety, or is it done and dusted, so to speak?

100%! Like you say, there’s so much of a legacy left due to our late banning of asbestos. Not a week goes by, that someone doesn’t post an image asking, ‘hey guys, is this asbestos?’ in one of the social media groups that I run. For sparkies, there are 100,000’s of homes in WA that would still have asbestos switchboard backs coupled with the fact that, if you look at some of the older suburbs, they would still have asbestos-lined walls in their wet areas and their eaves and so on. Yes, we definitely need to continue the education piece.

Reflections… Steeltoes & Stilettos – we connected prior to the 2020 event… we have evidence that you look pretty good in stilettos, Dan…

Thanks, that’s very flattering. I remember that conversation around that time and you being nice enough to have us on board as a Community Partner. It was a no brainer for me, given my background in the tradies, to help where I could and be a part of an event like Steeltoes & Stilettos.

This year we’ve asked you to come on board as STaS ambassador, how do you feel about that?

When you first rang to ask me, it was funny because you said it, and then went on to explain what was entailed, what were the benefits, etc and I was just waiting for you to stop talking to that I could say ‘yes, no worries.’ I’m honoured to be asked. I’m really looking forward to it. Ever since our meeting 18 months ago and being part of Steeltoes & Stilettos and watching from afar and seeing what you guys are doing and achieving, 100% believe in the cause and am willing to help out and do whatever I can.

The last event was a great night and I’m really looking forward to it. I think it’s a good opportunity for tradies to be exposed to a gala event, because outside of the other trade-based associations, and peak bodies award nights and that sort of thing, there’s not really anything that is tailored specifically for tradies and gives them the opportunity to dress up and come and have a bit of fun and a laugh at the evening’s proceedings.