Home renos – What do we know about asbestos? How much do we care? 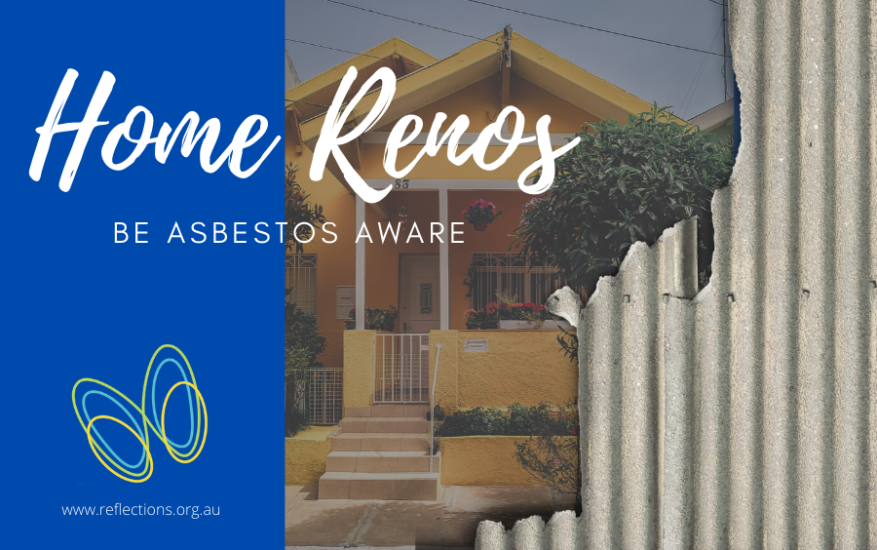 As we live in isolation to avoid the potentially deadly COVID-19 virus, many of us are blissfully unaware that there is a more sinister silent killer residing in many of our homes.

Pondering what I could write to encourage safety around asbestos, I’m mindful there are many resources out there from reliable sources but do we want to know? Do we really care?

That sounds harsh but it’s my experience that ‘it’s not personal until it’s personal’… and by then it’s too late.

If you knew something had the potential to kill you, you would avoid it. Asbestos is a silent killer and by that, I mean many people are not aware how common it is in so many homes and how deadly it really can be.

Before my father’s diagnosis in 2010, I knew very little about asbestos and its dangers and couldn’t even pronounce the terminal, asbestos-related cancer – mesothelioma. Ten years later, I run a charity reducing the impact of asbestos in the community through:

Over the years, my level of awareness has increased considerably and so has my belief that there are too many Australians who do not know or, in many instances, care enough to protect themselves and those around them.

As a building designer, I regularly visit sites where asbestos is present and just as regularly come up against a lack of understanding or, worse than that, a blasé attitude toward it. This is one time where the ‘she’ll be right, mate’ Aussie euphemism just won’t cut it. The facts are that it might not be all right. Asbestos is deadly, end of story!

You can’t see, smell or taste asbestos and there is NO KNOWN SAFE LEVEL OF EXPOSURE.

Let me break that down for you. That means if you think you can be exposed to a small amount of asbestos and not get sick, you’re wrong. It is true that some people will only get the calling cards of asbestos exposure and not go on to develop an acute illness, but there is no way of predicting who will get sick and who won’t.

My father, a builder, was part of the 2nd ‘wave’ of sufferers – those who worked directly with asbestos-containing materials. Unfortunately, due to the large amounts of in-situ asbestos in homes and properties, we are now experiencing a 3rd wave which includes people who were exposed to asbestos through DIY projects or tradies who were called in to do the work.

Through the support network Dad started in 2014, I have had the privilege of meeting and getting to know many lovely people whose lives were cut short due to something they knew little about and had limited exposure to. In fact, the majority of our current group are women with non-occupational exposure.

In 30 years time, are we going to look back to this time as another ‘wave’ of asbestos-related disease impacts our community? I believe we can do something now to prevent that. We need to make sure we are aware, that we understand just how dangerous this seemingly innocuous substance can be and take care to avoid exposure.

As many of us are using this time to catch up on some DIY around our homes we need to be mindful that asbestos was not banned in Australia until late 2003. As a general rule, if your house was built…

If you’re not sure and would like some advice, you can send through a pic and description of your project, and we’ll ASK AN EXPERT on your behalf. You can do this through our Facebook page or via email.

The message is simple…

Be safe! Be asbestos aware!