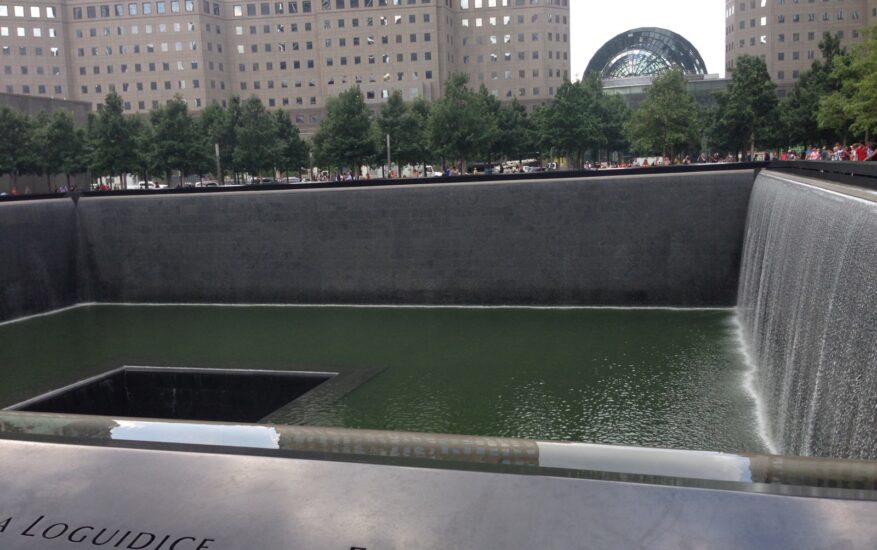 Yesterday marked the 20th anniversary of 9/11. I was only a toddler at the time and I cannot believe how this devastating event lives on all these years later.

In 2015, I was lucky enough to travel to America with my Mum and Dad. Whilst there we visited the National September 11 Memorial & Museum. There is the North and South Pool of where the two buildings once stood (see image below and above) and are now twin reflecting pools with the names of those who died all the way around. The memorial is a tribute of remembrance, honouring the 2,977 people killed at the World Trade Centre site. They are nearly an acre in size and are the largest man-made waterfalls in North America. 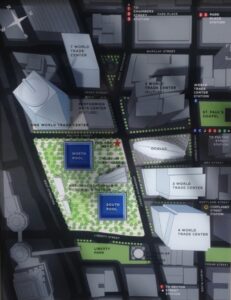 Inside the Museum I distinctly remember watching many videos of real footage from 9/11. Watching people jumping out of the buildings to their death was one of the many videos imprinted in my mind. The frantic phone calls were playing over the speakers, along with voicemails left for loved ones to hear their final last words and goodbyes. This brought me to tears. The whole experience was so confronting and overwhelming, I couldn’t have imagined being there on the day of the attack or watching the events uncover on the news.

What’s devastating is the clean-up crew and emergency workers are now suffering significant health issues 20 years after the terrorist attacks. More than 91,000 volunteers and workers were exposed to diverse hazards. As of March 2021, 80,785 of these responders enrolled in the World Trade Centre Health Program. This program was set up to monitor their health and treat those affected since the attack. It was found that 45% of the responders in the health program have conditions that affect the upper digestive tract and airways, 16% have cancer and just under 40% of responders with health issues are aged between 45 and 64. Sadly, 3,439 responders in the health program are now dead, which is far more than the 412 first responders who tragically died on the day of the event.

The death toll is expected to rise rapidly over the coming years as a result of the toxic dust that blanketed New York City when the Twin Towers collapsed. The dust that filled the air that day was full of toxic substances including hundreds of tonnes of asbestos. The US has consumed 31 million metric tonnes of asbestos since 1900, and asbestos remains legal and lethal in the US despite the serious health effects. So, you can only imagine how much asbestos was riddled throughout the Twin Towers. Mesothelioma usually takes 20-50 years to develop and there was a number of responders exposed to asbestos on the day of the attack. Mesothelioma isn’t the only issue though, 352 responders were diagnosed with asbestosis as of 2016. This is a terrible outcome to happen to those who risked their lives and were only trying to help. My heart goes out to all those affected by the events of September 11th 2001. 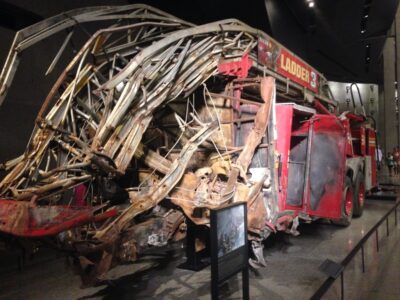 We’ve got to remember asbestos is not just something of the past. It has affected so many and will continue to, so we have to continue educating and creating awareness. There is no known safe level of exposure to asbestos. With Australia’s DIY culture, young men and women are often unknowingly encountering asbestos during home renovations. Across Australia, asbestos is in 1 in 3 homes. Something as simple as drilling a hole in the wall or letting your kids build a cubby out of old waste can be risky business. Asbestos doesn’t just affect home renovators though. Disaster zones pose a serious threat after bush fires, floods, storms and other disastrous events.

Every year in Australia, an estimated 4,000 people die from the effects of asbestos. Stay safe and educate yourself about asbestos. You don’t want to end up having to pay the price like so many unwillingly have from the collapse of the Twin Towers.